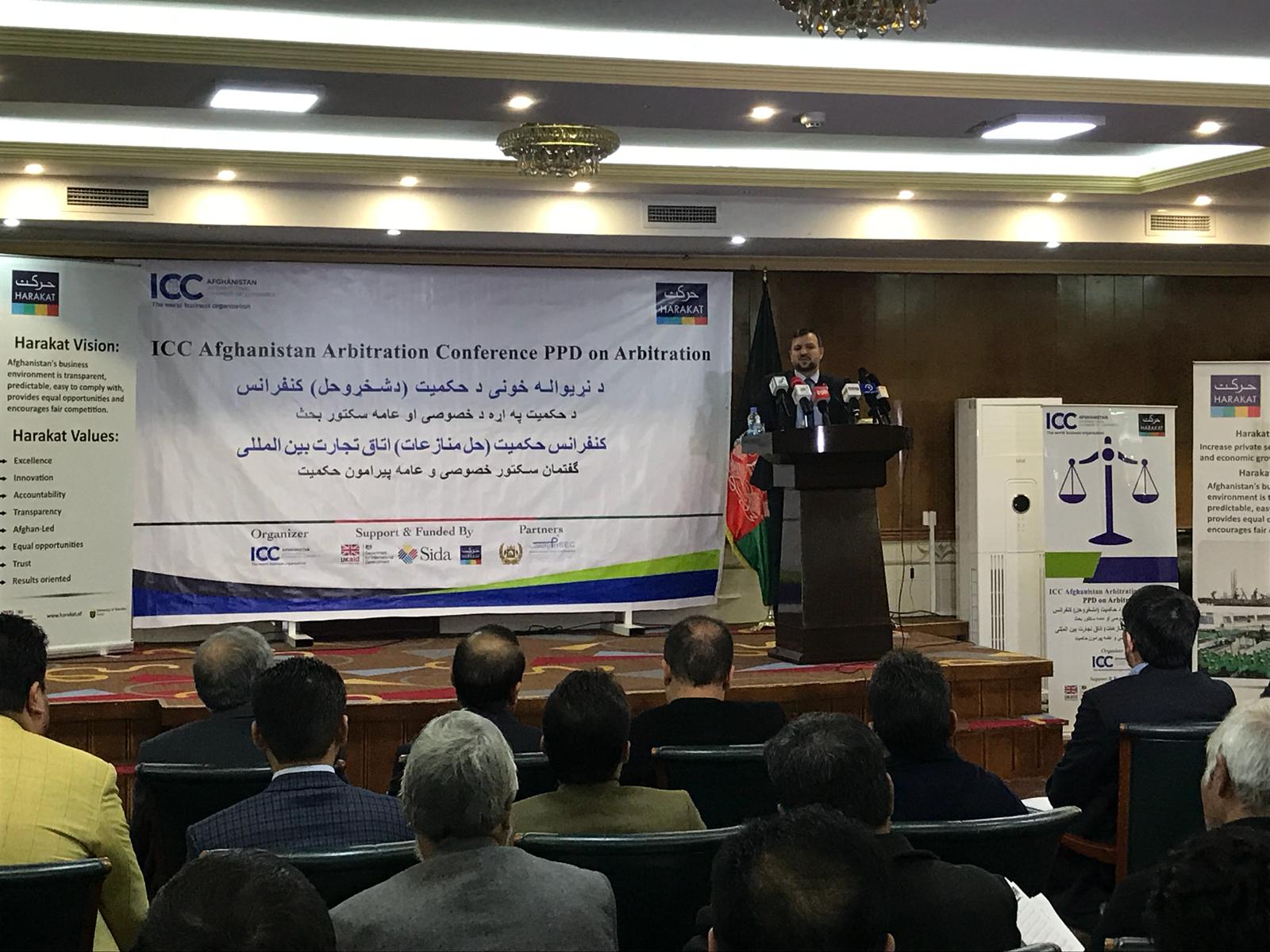 Harakat Holds The First Ever PPD On Arbitration In Afghanistan.

On Sunday, March 1, 2020, Harakat, in cooperation with International Chamber of Commerce (ICC), held a Public Private Dialogue (PPD) on Arbitration, which is the first ever PPD on Arbitration in Afghanistan. Senior officials from the Government of Afghanistan, including Mr. Abdul Karim Malikyar, Deputy Minister of Industry and Commerce, and Mr. Noor Habib Jalal, Deputy of Attorney General attended the event. The Chairman of the ICC, ACCI, members from business community and legal experts also attended the event. There were also two panels of subject matter experts, who technically discussed “Arbitration as an Effective Way to Resolve Commercial Disputes” and “Creating Mechanisms to Implement Final Decisions of National and International Arbitrations” in Afghanistan. During the event, important topics on Arbitration were discussed and barriers identified. Harakat, in collaboration with the PriSEC secretariat, ICC and relevant GoA departments, will work to actively advocate for the removal of the barriers identified in the PPD. Also, the PPD focused on how an effective Arbitration can play a vital role in attracting foreign investments, which will positively affect the economic growth in Afghanistan. Most of the participants and key speakers praised Harakat for this initiative. Abdul Qadir Bahman, CEO of ICC, thanked Harakat for supporting this initiative. He said, “Arbitration has been recognised as the most efficient way to resolve commercial and economic disputes in the world.” Afghanistan has also taken effective steps and has had tangible achievements in this regard. For instance, Harakat under the Afghanistan Investment Climate Facility (AICF) programme established the Afghanistan Center for Commercial Dispute Resolution (ACDR), which works on Arbitration in Afghanistan. Some challenges still exist, including lack of awareness about Arbitration in Afghanistan’s commercial courts, lack of awareness from New York Convention about Arbitration and lack of recognition of external and internal Arbitration by commercial courts to enforce the resolution of a dispute through Arbitration. Noor Habib Jalal, Deputy of Attorney General, talked about the history of Arbitration in Afghanistan. He said, “Arbitration can fundamentally solve commercial disputes and can pave the way for a win-win situation.” He added, “Afghanistan’s laws have all issues related to Arbitration and the Office of Attorney General is ready to cooperate with private sector, chambers of commerce and business community regarding Arbitration.” Abdul Karim Malikyar, Deputy Minister of Industry and Commerce, was also one of the key speakers. He said, “We have brought numerous reforms in the Ministry aimed to help Afghanistan’s private sector and business community. One-Stop-Shop project is a great example that has brought facilitations in both domestic and foreign investments in Afghanistan. On behalf of Harakat, Noor Alam Hakimyar, Harakat’s CEO, provided a brief information about Harakat and talked about projects and their suitability as well as effectiveness that have been completed by the organisation. He also said, “Harakat has been like a bridge between government and private sector. Harakat aims to prepare the ground for both domestic and foreign investments in Afghanistan.” He went on and added, “We will consider all the recommendations in this event, and we will continue to work with relevant institution to resolve these issues.”