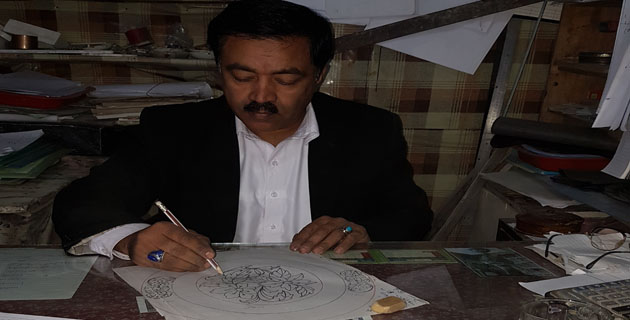 For 37 years, Abdul Karim has plied his trade as a gem cutter, marble worker, and trainer of future artisans. His shop in Kabul’s Shar e Naw district is a testimony to the skills his father taught him, as well as to the skills he is passing on to the next generation of artisans. Before returning to his homeland in 2002, he ran a thriving crafts business in Pakistan with 80 machines and 36 workers, including six women. His sales were good and he had a dependable market base. However, when he returned to Kabul, he could only afford space for 45 machines and 12 workers. Women were unable to work with him because his space did not offer female facilities. His productivity dropped and his sales suffered, limiting his ability to purchase the raw materials essential to his craft. This changed when he acquired a strong customer base in the expat community, however, in 2014, his shop was destroyed in a suicide attack and along with it, his stock and his many designs. Slowly and painstakingly, he began to rebuild, keeping a promise to himself that he would never abandon his craft. In 2015, Karim participated in the Harakat-funded Afghanistan Artisan Toolkit training in Kabul, conducted by the Turquoise Mountain Institute. After completing the training, a change occurred in his business. He came away from the training with new skills and a vision for his future. Karim says that the Afghanistan Artisan Toolkit training has enabled him to introduce standards in his output. Before the training, he could not produce multiple items to the same standard, whereas now he can produce hundreds of the same item with consistency and uniformity. Karim is not only an artisan, he is a teacher. He is passionate about passing along his skills and the knowledge he holds in his heart to young artisans. Inspired by the Toolkit, he developed and published a book about jewelry making and has distributed free copies to other jewelers and gem cutters. Karim’s experience is not unique. The Afghanistan Artisan Toolkit training allows artisans of all levels to reap the benefits. For established businesses like Karim’s, the toolkit has allowed him to professionalize his approach to business by instituting management procedures and budgeting systems. He has built a network with other Afghan artisans who are developing plans for trading internationally. His vision for the next five years is to build his business, expand his market base regionally and internationally, and keep his art alive among Afghanistan’s young artisans. Harakat invested in the development of the Afghanistan Artisan Toolkit to raise the standards and quality of Afghan artisanal outputs. The impact of this investment can be witnessed through the eyes of Afghan artisans whose products are reaching high-end boutique stores and trunk shows in major cities including London, Milan and Los Angeles. A collection of Afghan jewelry was recently sold to Nordstrom, one of the largest high-end department stores in the U.S. Learn more at ArtisanToolkit.af