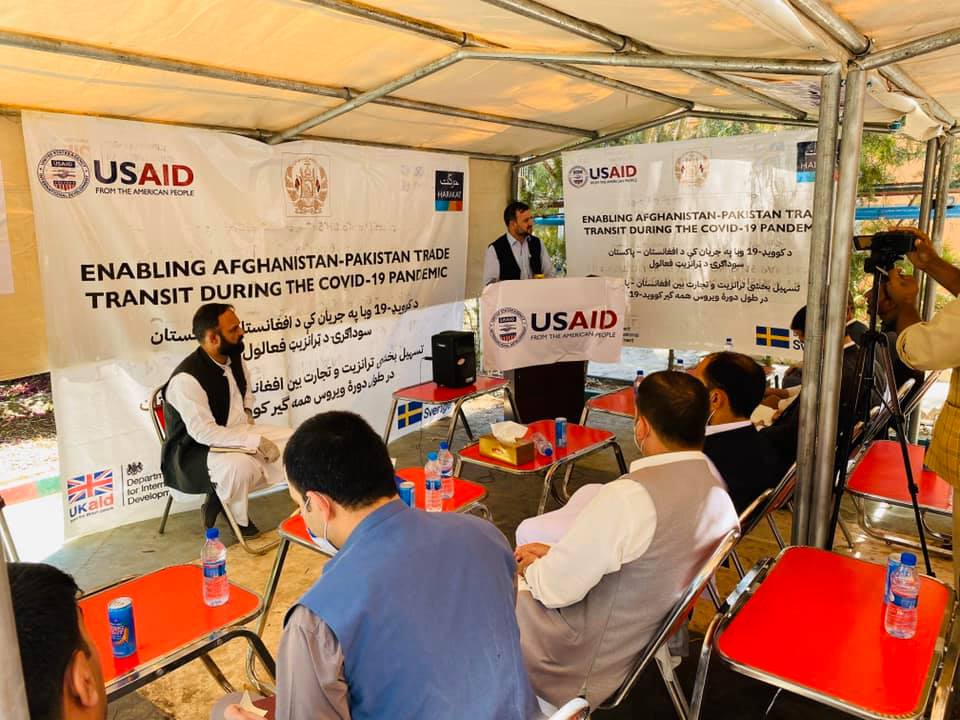 On June 14, 2020, Harakat and USAID launched the first phase of their joint project at the Torkham border.  The joint initiative aims to increase the efficiency of disinfecting vehicles and cargo at the Spin Boldak and Torkham border posts with Pakistan.  Pakistan’s government had closed its borders with Afghanistan following the onset of the COVID-19 pandemic, which were then reopened on May 19, 2020, for one-way trade.  However, the agreement to reopen the borders were for the vehicles and the cargo to get disinfected as they are transferred at the border posts.  The rapid increase in the number of vehicles following the May 19th agreement had exceeded the capacity of the existing disinfection crew, who are also using ineffective spraying equipment.  Therefore, Harakat, through this joint project and its partnerships with the Afghanistan Chamber of Commerce and Investment (ACCI) and with government organizations, will lead and channel its support to double the disinfection capacity on both borders.

The joint project between the two entities also included supporting private sector organizations and the Afghan Government to negotiate better trade terms with Pakistan, including the increase in the efficiency of customs procedures.  Trade transport between Afghanistan, Pakistan, and India are extremely inefficient, which directly affects the time and cost to move commodities. These inadequacies are deeply rooted in weak trade policies and in the lack of enforcement of the ones that could favor Afghanistan, among them the Afghanistan Pakistan Trade Transport Agreement (APTTA). While it is the mandate of Afghanistan Value Chains High-Value Crops (AVC-HVC), managed by DAI on behalf of USAID, to contribute to increasing the productivity of trade transport for Afghan exports, Harakat possesses the expertise, the high-level contacts and the reputation in trade policy.  AVC-HVC will fund Harakat’s activities to support the enforcement of APTTA.  Harakat will also support AVC-HVC clients and other market actors to conduct policy analysis and produce policy recommendations to improve the efficiency of the customs border posts with Pakistan.

The launch event started with Mr. Bashari, Deputy Director of Agriculture in Nangarhar, thanking Harakat and USAID for their initiation of this project. He said, “This project will facilitate and help Afghan trades to readily export Afghanistan’s products to Pakistan,” and added that, “While COVID-19 is spreading across the country, doubling the efforts for disinfecting of cargo at the Torkham border is a valuable part of this project.”

Mr. Noor Hakimyar, CEO of Harakat, gave brief introductory remarks on Harakat and reminded the attendees that, in comparison to Pakistan, Afghanistan’s exports are low. Therefore, in cooperation with our donors (USAID, DFID, and SIDA) and Afghanistan’s government institutions, Harakat will try to increase Afghanistan’s exports to Pakistan.  He also added that, “When it specifically comes to this project, we need formidable coordination to fully implement this project.”

Dr. Mukhlas, member of Nangarhar Chamber of Commerce, thanked Harakat and USAID on behalf of Nangarhar Chamber of Commerce and for initiating this project. He also shared his gratitude and appreciation for all that Harakat has achievements for and supported the private sector.  At the same time, he pointed out that while Harakat’s projects are mostly focused in Kabul, expanding its activities across provinces is much needed as well. His specific collaboration requests for Nangarhar were for Harakat to build cold storage units and to conduct capacity building in various fields.  He concluded his remarks with asking the Afghan government to resolve the tariff issues with its counterparts in Pakistan.

The event concluded with Mr. Khalil Salahzada, Director General of Customs in Afghanistan, sharing his appreciation for Harakat and USAID. He shared that they have always attempted to talk with the Pakistan’s government to keep the borders open. As a result, Pakistan agreed to reopen the borders during the COVID-19 pandemic. He also added that they expect the private sector to closely work with the government to resolve the obstacles on the way of exports. He furthermore mentioned that the government’s strategy in the long-term is to change Afghanistan from an importing country to an exporting country.  Hence, they are currently working to develop a policy on tariffs to achieve this goal.